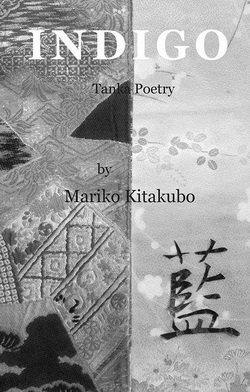 Mariko Kitakubo has published five books of tanka including two bilingual ones,
"On This Same Star" and "Cicada Forest." She has also produced a CD of her tanka titled "Messages."

Mariko is an experienced performer who has presented her poetry on at least 130 occasions, 80 of them overseas (Nov. 2015). She hopes to encourage more poetry lovers worldwide to appreciate and practice tanka.

Please click here to purchase the book on Amazon or Barnes & Noble.
​
​
“The Japanese, for over a thousand years, have composed the tanka and considered it their most important form of poetry. In the nineteenth century, the spread of European poetry induced many Japanese poets to doubt that a poem in only thirty-one syllables could be anything more than the record of a momentary sensation.  Ishikawa Takuboku, though famous as a rebel poet, answered the doubters, “Although a tanka may last only a second, it is a second that will not return again, no matter how long one lives.  I believe that such moments are to be cherished, I do not wish to let them escape.” He added somewhat cynically, “One of the few blessings that we Japanese enjoy is having the tanka.”
Takuboku retained the traditional thirty-one syllables of the tanka but divided them into three lines, instead of the traditional single line,  giving the form greater dramatic possibilities.
The poems of Mariko Kitakubo, both in Japanese and in English, contain a combination of the thousand year old and the most modern. Her Japanese poems have the traditional number of syllables and the English poems are divided into five lines as in tanka :

suddenly
the shadow of a moth
growing larger--

after an embrace
difficult to resist

The Japanese poems are in ancient, not modern speech. But the division of the poems into two sections in the Japanese and five  in English makes the poems seem strikingly modern. Mention of a moth, an insect appealing to English poets but shunned by Japanese poets, may seem to separate the two worlds, but the embrace brings them together.”

“Mariko KItakubo's sixth book of tanka is a masterpiece of disquiet and profound yearning. It's poetry speaks to the human condition in an era that has just begun to understand, and attempt to divert and remedy, a ruination that evidence shows mankind itself has inflicted on the planet. Indigo leaves us gazing with longing upon our own disappearance into the existential drifts of time and materiality.

Kitakubo writes, "my motherland / will be a coffin / of the stormy wind" and points to "the light rain / of radiation" to show us how "history is settling / in the bottom of the river."  She sees herself as "an infinitesimal / splash in the dust" and outlines in images of stark finality a vision of sunflower seeds and a people-less planet "after the dream / of civilization." Here is poetry that steps with courage and passion into the forum of ideas and the enormous issues of our day.  Kitakubo's mastery of the ancient tanka form gives to her testament in Indigo the perspectives of personalized history and the high art of a compelling literary tradition.

My congratulations go to Shabda Press for publishing this first edition of a work so worthy of universal value and wide readership. May the voice within us all find equal resource, principle, and kinship.”
​
--Michael McClintock, President, Tanka Society of America (2005-2011) and author of "The Tanka Café" in Ribbons: Tanka Society of America Journal.

"From floating lanterns at Hiroshima to the unstoppable petal storm of cherry blossoms, Mariko Kitakubo’s vivid imagery tugs at the full range of our emotions—from the horror of war to the joy of a new love, from redwood forests to dreams of Betelgeuse, Indigo is a highly recommended journey you will never forget."