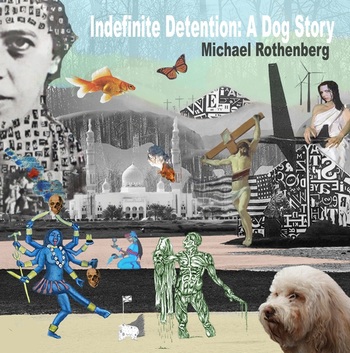 Purchase Indefinite Detention: A Dog Story by Michael Rothenberg on  Amazon or Barnes and Noble

Born in Miami Beach, Florida in 1951, Rothenberg moved to the San Francisco Bay Area in 1975 and co-founded Shelldance Orchid Gardens in Pacifica, which is dedicated to the cultivation of orchids and bromeliads. While in Pacifica, he helped lead local environmental actions that stopped major coastal developments that would destroy wildlife habitat.

Indefinite Detention: A Dog Story is scheduled for publication in 2014 by both Shabda Press (USA) and Al Kotob Khan (Cairo, Egypt) in an Arab edition, translated by El Habib Louai.
front & back cover

"Out of a seeming mist of in-the-moment observations Michael Rothenberg treats us to hawk-like swoops of intellect that land unerringly on startling insights. He gives us the world that hides from the world and does so with wit, compassion and an ease with technique that renders his poems both masterful and readable."  - Robert Priest

"From under the Northern California Redwoods, Michael Rothenberg writes with an abundantly concerned and familiar voice, commenting freely about the world at large and matters at hand, keeping a sharp look at the aftershocks of reality in a future which happens to be 'now'. A delightful book for our times."  - Joanne Kyger

"What luminous joy in Michael Rothenberg's poems! Even when handling the grim realities of war, his brilliant spirit lifts the poem into a kind of celebratory praise. And his dog sequence is Dog Zen wisdom with a twist of Marx Brothers thrown in. This is the rockin' dance of experience & imagination on a beam of light.
What a delight!" —Sam Hamill